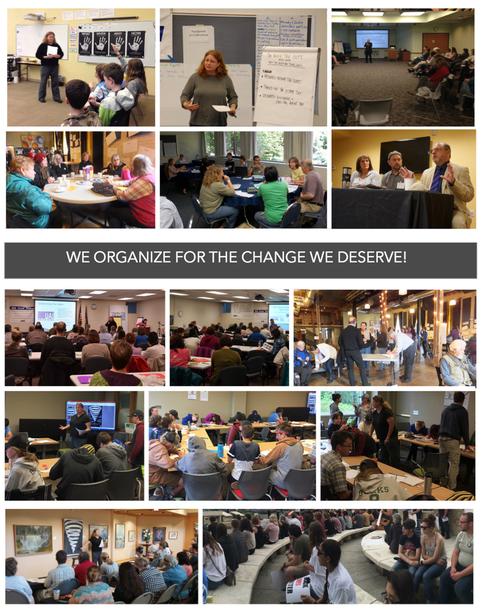 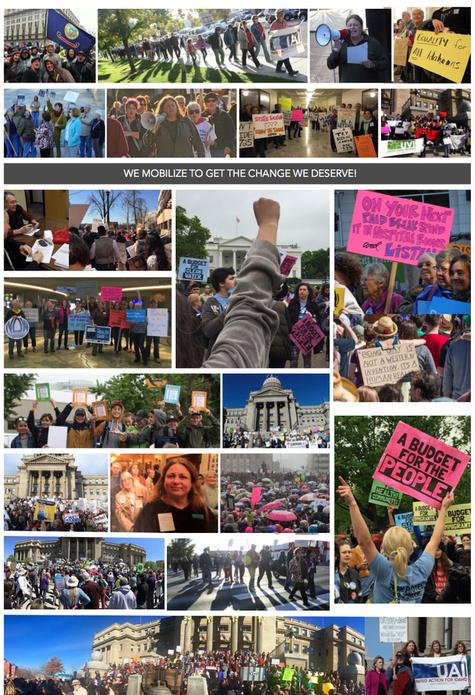 ​
We're up against tremendous forces and an economic and political system designed to benefit corporations and a tiny few, pushing the rest of us to the margins. Systems of racism and exclusion that perpetuate violence and deny people even the essentials based on race, gender, sexual orientation, ability, religious preference and country of origin.

Special interests and the far right have long secured a foothold in Idaho. In fact, the American Legislative Exchange Council, policy machine of the Koch brothers ranks Idaho seventh among their targeted states, and has publicly proclaimed Idaho next to Utah as their greatest success. The vast majority of legislation that makes it way to a vote in the Idaho Legislature is an ALEC bill. A number of key legislators in the majority party are solicited and groomed by outside special interests to advance their agendas. This has been a concerted effort to monopolize state governments, pass and normalize legislation across the country to  ultimately bypass Congress and have determinations made by a Supreme Court of their making.

But,our history’s most powerful movements teach us important lessons: We won’t win more by demanding less. While the unbridled influence of money is a significant challenge, when people are united the greatest advancements of justice are realized. So, we’ve got our sights set on the long term. While we fight for change here and now, we’re also working to rebuild our economy and create a democracy for all of us.

Knowing change starts close to home, we’re building powerful organizations statewide where people of all races, faiths, gender and ability are working to create change. We’re developing local leaders who can power our campaigns and policy makers at all levels of government, and advance an agenda worth fighting for. In short, we’re creating a movement made up of people like you.

Together, we can create a state and a world where we all have what we need to thrive, achieve, and feel our full worth at home, at work, and in our communities. We can change how we measure success. Our yardstick will be the health and happiness of all people and the wellbeing of our planet.

WHAT MAKES US DIFFERENT?

This is not just about one campaign, or one election cycle. We are not  building for a moment, we are building a powerful movement for EVERYONE and one that outlives us. ​This isn't just resistance, it's visionary resistance!

Good organizing requires sound strategy, it builds long-term, sustainable people power. It is grounded in transformational change and relationship building. Our work is producing policy change at the highest level and centering Idaho at the national level, creating a model for how to organize in some of the most rural and conservative places in the country and challenging the rise of White Nationalism by engaging people in a process of deep listening and community building and connection between people that offers a different political and social analysis.

It is the movement that is needed; one that isn't just focused on short term goals, but one with a real strategy to a achieve a bold agenda that produces structural and fundamental change. We are millions working to reimagine and remake our democracy, one that works for EVERYONE.

We’re an organization driven by local, state and national organizing priorities. Movements depend on people who feel responsible for our world and are determined to fight for change. Together, we’re fighting for a people’s agenda from city councils to the state and federal government.

We work with lead organizers and organizations across Idaho and the country to train staff and leaders, develop research and policy, learn from each other’s work and push ourselves to advance bold ideas and our vision for a just world. Most of all, we take action together on the streets, at hearings, in statehouses, in elections and at Congress. That’s how we fight together and win.

Government is not the problem. It’s the prize. That’s why we’re fighting for a democracy where people - not corporations - set the agenda, and where we all have a voice. In towns and neighborhoods across Idaho, we hold deep conversations with people about the issues and values that matter to them. We unite communities in our shared struggle to build a world and democracy that works for ALL of US.

We provide tools for analyzing the forces that shape our world, and training to transform communities into a force at the polls. We ask tough questions, holding elected accountable and securing policy commitments. Together, we are transforming our political system town by town and state by state.